Poetry Trails and Readings Out Loud Rock & Ice magazine has ranked Ogden among the top ten climbing towns, and rightfully so, given the ready access to rock and ice routes just a short hike from town.

Ogden boasts a rich climbing history that has seen ascents by climbers such as Yvon Chouinard and Royal Robbins.  We are also home to world-renowned alpinists Jeff Lowe and George Lowe. From indoor bouldering to sport climbing to 1,000ft tall adventure routes, Ogden offers something for all climbers from beginner to expert.

There are a number of venues in Ogden to climb indoors or learn the ropes. iRock is conveniently located downtown at the Junction in the Salomon Center and is a good venue for first-time climbers. The Front Climbing Club located at 20th and Lincoln is a fully modern climbing facility offering top roping, lead climbing, ample bouldering, fitness equipment, a yoga studio, and a dedicated climbing training facility. Weber State University hosts a small climbing wall in its Stromberg Complex, Weber Rocks is open to community groups in addition to the number of academic classes offered to students and community members.

The Ogden boulder field is located below the Bonneville Shoreline Trail, between 25th and 27th streets. A number of quartzite blocks afford numerous problems from V0 to V9. The lower boulders are approached by parking at the end of Lake Street near St. Joseph High School; a short walk uphill leads to the boulders. The upper boulders are approached via 27th street. A hike due east from the end of 27th Street follows trails up the hillside to the north/left. The trails and boulders in each area are indicated by trail signs, making it straightforward to identify problems.

Ninth Street’s proximity to parking, plethora of sport routes, and easy top rope access make it the most popular crag in Ogden. A small parking lot is available at the eastern terminus of 9th Street, near the Ogden Bike Park. From the parking lot, head north along the gravel canal road. The 9th Street Crag is the 40-foot tall cliff band above and on the right, offering routes from 5.8+ to 5.12+. Just ahead on the left, below the trail near the fence, is Lower Ninth Street, offering a handful of lines from 5.6 to 5.9.

The School Room offers mostly single pitch lines on the cliff band on the East Bench of Ogden between 22nd and 27th Streets. Moderate sport climbs and some top roping can be found at Utahnics Wall and the Ramp Routes, accessed via the 27th and 22nd Street trailheads, respectively. The 22nd Street trailhead also offers access to the Sunday Wall, with a concentration of moderate trad routes, and Asbury Park, with a great selection of moderate to difficult sport climbs.

Driving east on 12th Street from Ogden leads to Ogden Canyon. Numerous lines are scattered among the gullies on the south side of the canyon. While automotive traffic in the canyon can make approaches to these lines challenging, they offer some of the best warm-weather climbing in town owing to the copious shade provided by the northerly aspect of the gullies.

The multipitch climbing opportunities in Ogden offer some of the tallest lines in the Wasatch as well as plenty of adventure. The first 5.12 in the United States was established by George and Jeff Lowe on the Macabre Wall. Jumpoff Canyon is home to “The Jagged Edge,” a great moderate multipitch line on high-quality rock. Routes up to 1,000 feet tall can be found on the Mezzanines. The London Spire just above the town of Willard is a storied alpine training ground. A quick ride on the gondola at Snowbasin lends ready access to the climbing on the slabs of Mount Ogden.

There are a number of ephemeral ice smears and flows that form around Ogden in the winter, but perhaps the most noteworthy is Malan’s Falls, the first vertical ice climb in the United States, again established by George and Jeff Lowe. From the 29th Street trailhead, follow the trail signs to Waterfall Canyon. The frozen falls offer 3 - 4 pitches of WI5 with a southwest-facing aspect that can make for a pleasantly warm climb but demands an early start. North of Ogden at the east end of 300N in the town of Willard lies Willard Canyon, with Willard Falls at the head of the canyon. This long flow freezes consistently throughout the winter and offers a rambling moderate climb of 4 pitches up to WI3. 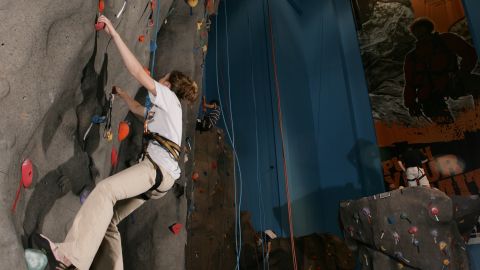 Indoor climbing experience with walls ranging in height from 30 to 55 feet. Top-rope belay systems provide a safe way to climb for all ability levels.... 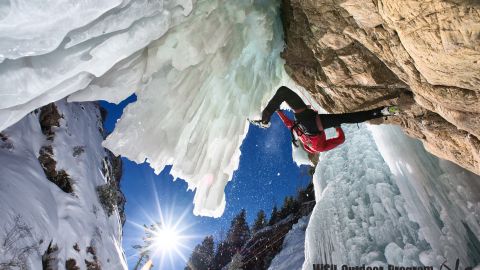