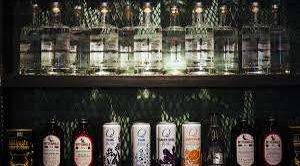 EDEN, UT, April 3, 2019 — New World Distillery announces the release of their Apple Brandy, Saturday,
April 20. Last fall, owners Chris and Ashley Cross released an unaged Apple Brandy, or Eau de Vie. Half of that distillate has been aging in used, Sugarhouse Distillery Bourbon Barrels for this latest Uncharted Series release planned for later this month. New World Distillery’s Third Annual Earth Day Celebration will take place on Saturday, April 20 from 11 - 6 at the distillery in Eden. Mountain Arts and Music will be sponsoring all day musical talent and there will be vendors, a food truck and tours of the distillery on the hour, every hour.
This Uncharted Series Apple Brandy release is the third farm-to-bottle spirit to be released by New World and a project that was undertaken in conjunction with Paradise Valley Orchard in Logan, where the fresh apples were pressed. There are 17 different varieties of apples used in both the Eau de Vie and the
Apple Brandy. Both spirits are fermented and distilled on site in Eden.
A portion of the proceeds from New World Distillery’s Earth Day Celebration are donated in support of The Ogden Nature Center and The Wildlife Rehabilitation Center of Northern Utah. The Uncharted Series of spirit releases is exclusive to the distillery and bottles are available only in Eden.

About
New World Distillery is committed to representing the Ogden Valley with exceptional small batch, abovetop-shelf spirits. Founded by Chris and Ashley Cross, New World Distillery is a proud contributor to the Ogden Valley community through responsible use of natural resources, International Dark Skies compliant lighting, solar-powered equipment and many other green processes, the details of which are shared with customers when they tour the facility. A destination distillery, New World has a welcoming retail store front and sells merchandise, mixers, and their own, site-distilled products. Their current line of products includes their award-winning Oomaw Gin, Rabbit and Grass Blanco and Reposado Agave Spirits, Ogden Valley VODKA, Wasatch Blossom Utah Tart Cherry Liqueur and the Uncharted Series.

New World Distillery opened its doors December 10, 2016 and is located at 4795 E 2600 N in Eden, Utah.
For more information, please see www.newworlddistillery.com or visit the distillery in person.