Snow Report Brought To You Buy

In 1862, President Abraham Lincoln signed the Pacific Railway Act, authorizing the Central Pacific Railroad to build a line east from Sacramento and the Union Pacific Railroad Company to build west from Omaha. The transcontinental railroad bound the nation together with its completion in 1869 at Promontory Summit, Utah.

With the connection of the Union Pacific and the Central Pacific, along with other rail lines that went north and south of Ogden in the following years, Ogden was designated in 1874 as the junction location of the two railroad companies, earning it the nickname “Junction City.”  Ogden became alive with the movement of train passengers, service men, and railway workers, welcoming all sorts of visitors - some legitimate and some not so much to this town. As people poured into town, they would stroll up and down Historic 25th Street to prospect for business, dine, gossip, and enjoy upscale shopping. The city quickly became known for its wealth, and for its rough and tumble character. A place where one could gamble, spend some time in a brothel, and get a few drinks.

150 years later we are celebrating this iconic event with celebrations at Promontory Summit, the Ogden Union Station, and the surrounding communities.

Northern Utah’s Golden Spike Country and railroad history are much bigger than the golden spike. 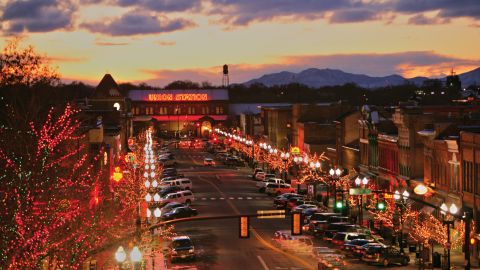 25 Things to do on Historic 25th Street

Can you do it all in one day?

Destination Ogden and the Ogden Valley: Another Utah