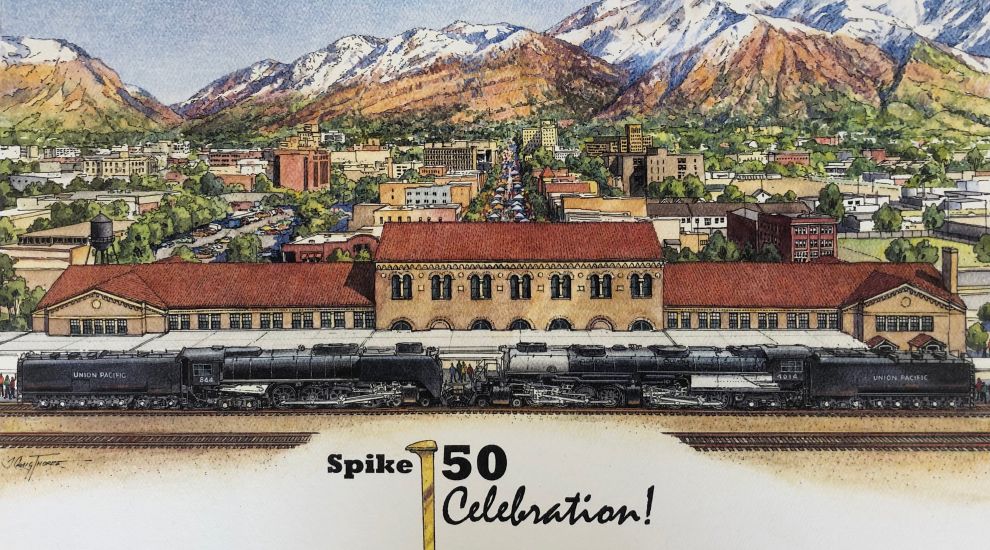 You don’t have to be able to pronounce “sesquicentennial” to be part of a celebration that only comes along every 150 years.

From May 9th through the 11th, tens of thousands of local residents and visitors from around the world will fill the streets of Ogden during Ogden’s Heritage Festival, celebrating the 150th anniversary of the completion of the Transcontinental Railroad.

The celebration begins to ramp up starting April 27th with the arrival of Union Pacific’s Heritage Fleet, including the brand new “Experience the Union Pacific Railcar.” This multi-media walk-through exhibition provides a glimpse at the past while telling the story of modern-day railroading. The exhibit will be behind Union Station through the end of the Heritage Festival. Please note that due to the historic nature of the Heritage Fleet, it is not ADA accessible.

Access to the Union Pacific Steam Meet area just south of Union Station opens at 5:00 a.m. on May 9th…and yes, people will be grabbing their spots at that early hour. Bleacher seating will be available on a first-come, first-serve basis, but the bulk of this ceremony will be standing room only. No backpacks, coolers, chairs, or large strollers will be admitted to the area, so plan accordingly.

The Steam Meet program will begin at 10:00 a.m. with a video presentation, followed by the National Anthem with the UP color guard. The 844 and 4014 locomotives will be brought together for a nose-to-nose meeting reminiscent of the iconic meeting of the Jupiter and 119 locomotives at Promontory Point 150 years ago. Utah Governor, Gary Herbert, will share remarks, along with Union Pacific leadership, complete with Golden Spike photo-ops similar to the famous “Champagne Toast” image captured at Promontory Summit. The program will conclude with a throwback to the telegraph message sent across the country in 1869 (“The last rail is laid ! The last spike driven. The Pacific Railroad is completed.”), but with a 21st century twist: a similar message will be tweeted.

From that moment through May 11, the Heritage Festival will be in full swing with live music and cultural performances on the Heritage Stage on 25th Street and on the Union Station Plaza. The events at Promontory Summit will be simulcast on large screens from noon to 1:00 p.m. on May 10. Dozens of exhibitors in the Grand Lobby of Union Station and up Historic 25th Street will include historical demonstrations, train-related merchandise, and local food and beverage vendors.

The 844 and 4014 will be moved behind Union Station for close-up viewing on May 10 and 11. While spectators will not be allowed on the trains, elevated platforms will provide views inside each cockpit and a Union Pacific employee will be on hand to answer any questions from 10:00 a.m. to 3:00 p.m. both days. Steam releases and whistles will punctuate the event until the departure of the locomotives at 8:00 a.m. on Sunday, May 12.

The best places to catch a glimpse of these behemoths in motion on Sunday morning will be along Pacific Ave., directly west of Newgate Mall, and along the trail system that runs through the Weber River bottoms near the Riverdale City Offices. Please refrain from attempting to view the departure from the 31st Street and Riverdale Road viaducts due to their narrow shoulders and lack of pedestrian access.

Information on road closures, parking, shuttles, and a full schedule of events can be found at goldenspike2019.com, and on-site information booths will be located throughout the festival.

Plan additional activities in the area by visiting visitogden.com.